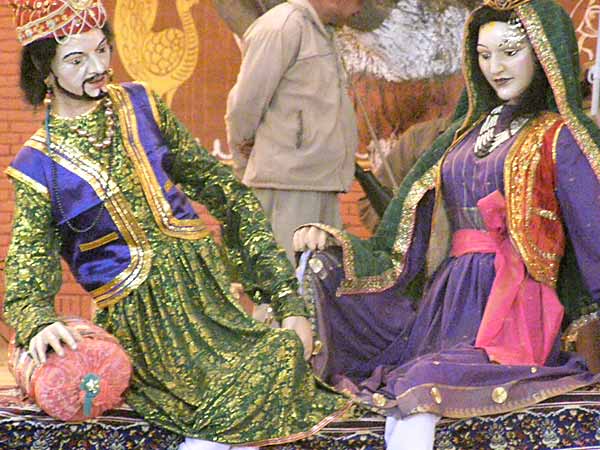 Taj Mahotsav is one of the most cherished cultural festivals of India, admired by the foreigners and locals alike. Held every year, between February and March, it is a ten day feast of classical dances, folk art and light music. This grand carnival takes place in Shilpgram, a place located very close to the Taj Mahal, Agra. Taj Mahotsav is an ode to the rich cultural heritage of Uttar Pradesh. This special Mahotsav is organized by Uttar Pradesh Tourism. It is one of the major attractions for tourists and draws thousands of visitors to Agra every year, from India as well as abroad.

Folk Artists
The major attraction of Taj Mahotsav is the soul stirring performances by folk artists from various Indian states. The festival is an apt showcase of the art and artistes of Indian origin and Indian culture. The brilliant performances by these folk artists cast a magic spell on the visitors. In Taj Mahotsav, one can experience a profusion of folk music and dances of Dundelkhand, Nautanki (Drama), Sapera dance of Rajasthan and Lavani of Maharashtra as well. These dances are performed just the way they used to be centuries ago.

Traditional Handicrafts
Apart from folk dancer, Taj Mahotsav also allows guests (from India as well as other countries and cultures) to peep into the diverse culture and traditions that have enriched this vast land for centuries. Traditional handicrafts and art, such as carving on wood and metal, is displayed. Marble, of course, rules the festivities each year (for obvious reasons). Mughal Durbar, one of the enchanting attractions of the bygone era, is reconstructed every year at the festivals, complete with elephants, camels, drum beaters and all other splendor of that era.

Exotic Cuisine
Indian festivities can never be complete without the preparation of exotic cuisine and it occupies a place in Taj Mahotsav as well. Some of the best and richest foods of India are available here. Typical cuisines are specially prepared by some very talented chefs, with delicacies being prepared from the oldest exponents that were used in the past era. These dishes are presented in the same way as they were presented centuries ago, in front of the rulers and royal family of the Mughal era. Other typical foods of Utter Pradesh are also available in this festival.

Shopping Material
Agra and Taj Mahal comes to life during this festival, with a lot of activities taking place. The whole place looks like a small Uttar Pradesh market. In this mini market, one can get handicrafts, antiques, woodwork, ivory work and other famous and special items of Uttar Pradesh. Exquisite crafts made of marble, wood carvings from Saharanpur; brass and other metal-ware from Moradabad; handmade carpets of Badohi, the blue pottery of Khurja, the Chikan work of Lucknow and the silk of Banaras are also widely exhibited during the Taj Mahotsav.