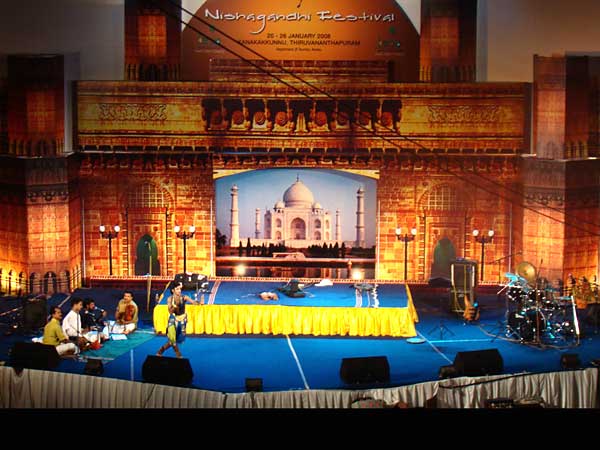 Nishagandhi Dance Festival popularly known as Nishagandhi Nritya Utsav is celebrated twice a year, once in the month of October-November and then in the month of March-April in the Nishagandhi Theatre, in Kanakunnu palace compound, in the city of Trivandrum or Thiruvananthapuram, Kerala. This festival is about a week long and witnesses participation from artisans all over the country. The artists who are keen on promoting the diverse Indian heritage are an integral part of the Nishagandhi Dance Festival as this festival provides them platform to reach to a wider section of audience.

Renowned artists of Bharatanatyam, Mohiniyattam, Kathak, Odissi, modern ballet and other folk form from all over the country perform at the open-air theatre of Nishagandhi during this dance festival. Famous names like Madhumita Paul, Madhavi Mudgal, N. Srikanth, Aswathy, T.V. Sankaranarayanan, Vyjanthi Kashi, Priti Patel, C.V. Chandrasekhar, Mattannur Sankarankutty and Balabhaskar are attached with this festival. Admission to this event is absolutely free and the festival usually is accompanied by classical, instrumental or fusion music.

Apart from being a retreat to the dance lovers, this festival also exhibits the traditional arts and handicrafts of Kerala and the cuisines of India. A fair is held in the Sooryakanthi Fair Ground, adjacent to the dance festival venue. This fair showcases crafts from Kerala made of bamboo, cane, clay and coconut products. A food festival is also held at the same venue, which witnesses participation of grand hotels and famous personalities. You can get wide variety of dishes right from Kerala’s traditional recipes such as avial, koottukari, payasam and pulisery to the exotic Mughlai and scrumptious Bengali dishes at this food festival. Other than the dance, this fair is also a major crowd puller to the Nishagandhi Dance Festival.

The Nishagandhi Dance Festival witnesses participation from people all over the country. This dance festival with its varied dance forms and artists from all over the nation seems to a fascinating glimpse of India's rich dance heritage. This is why, it becomes an extremely enriching and interesting event for those who are looking to explore deep into the culture of India. This festival also comes as a welcome shower for the city dwellers and tourists twice a year who are provided with a beautiful opportunity to re-interact with their rich and varied culture again and again.