Resources
Organized by the Government of Karnataka, Hampi Festival is a dance and music festival which is held annually in Hampi.
Indian Dances: Dance Festivals: Hampi Festival 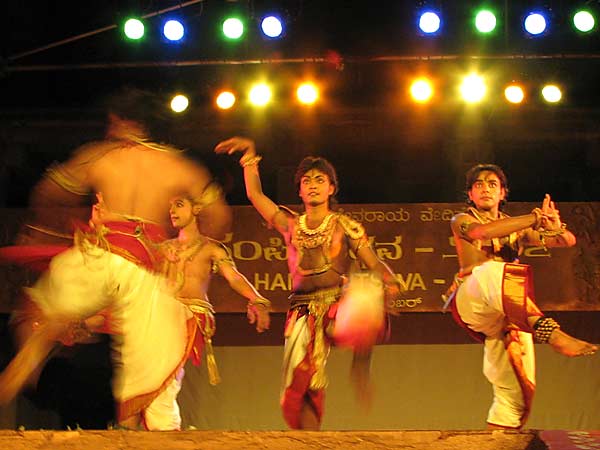 Organized during the month of October and November, Hampi festival is one of the major tourist attractions of Karnataka, a southern state of India. The festival, which features an scintillating performances of dance, drama and music, is organized amidst the rocks and ruins that date back to hundreds of years. The village of Hampi, situated near Vijaynagar, is filled with the enchanting music, dance and drama, when the Hampi festival is held. The Government of Karnataka organizes the festival every year. Puppet shows, fireworks and spectacular processions are some of the highlights of this festival.

The grandeur of the bygone era is recreated by Hampi festival. Artists from every nook and corner of India gather to perform as well as celebrate this festival with the appreciation of the enthusiastic people, who turn up from different parts of the country and the world to witness the enthralling performances. The dancers are trained vigorously to deliver their level best. On the other hand, the musicians make it a point to practice repeatedly, in order to deliver classical music that is soothing to the ears of the listeners. The open air environment of the venue boosts up the festive spirits of both the performers and the spectators.

The village of Hampi, which is otherwise a calm and quite place to reside, is fully animated during the Hampi festival. The inhabitants of the village enjoy the presence of the artists in the village as well as give full coordination to make the celebrations successful, year after year. The scintillating fireworks at display light up the sky, as the festival progresses. The spectacular processions carried out add to the overall appeal of the occasion. The three-day cultural extravaganza is something that should not be missed, when you are visiting Karnataka.