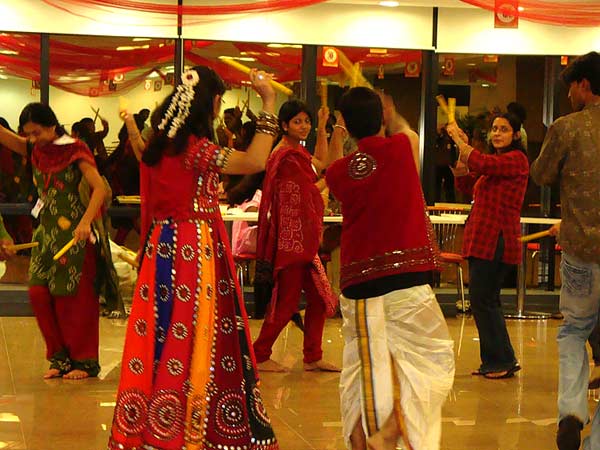 India is a land of myriad art forms, one of the most predominant being dance. Whether it is classical or folk, the residents of the country have inclination towards the art form, which is performed in many festivals observed by them. Many people have taken dance as their profession and have been successful in pursuing their career in the art form as well. Talking about folk dances, you can see a wide variety of variations in them. In fact, it is different in different parts of the country. Closely related to the indigenous rituals and cultures, some of the folk dances are still prevalent in many parts of the country, while others have faded away with the modernization of the art. In this article, we have discussed about the most popular folk dances of the North West part of India.

Dandiya (Gujarat)
Dandiya is the folk dance of Gujarat, which shows the great vigor and joy of the in habitants of the North West State of India. Dressed in colorful costumes, the people of the desert play dandiya gracefully, by holding big sticks in their hands (used as the prop for the dance). The dances are accompanied by the musical instrument called the 'Meddale', which is played by the drummer positioned in the centre. Apart from being a traditional dance form of the state, Dandiya features in the 'navratras', a nine-day festival that is observed with pomp and gaiety across many parts of the country.

Tarpha Nach
'Tarpha Nach' or 'Pavri Nach' is the dance of the Kokna tribals native to the hilly regions of the north-west India. These dances derive their names from the wind instruments of 'Tharpa' or 'Pavri', which are made of dried gourd, played during the dance performance. During the dance performance, the performers stand in a close formation, holding each other by the waist, and then dance to the tune played by the wind instruments, gracefully. The dances are performed by men alone as well, who form pyramids or rapidly revolve a dancer round a stout pole.

Tera Tali (Rajasthan)
Native to the 'Kamar' tribe of North West India, Tera Tali is performed by two or three women. The performers sit on the ground while performing the Tera Tali, which is an elaborate ritual, followed in the region. Small metal cymbals called 'Manjiras' are tied to different parts of the body, mostly on the legs, of the dance performer. The dancers hold the metal cymbals in their hands and strike them in a rhythmic manner. In some cases, you can also see women clenching a sword in between their teeth and balancing a decorative pot on their head, while performing Tera Tali. The women cover their head with a veil.