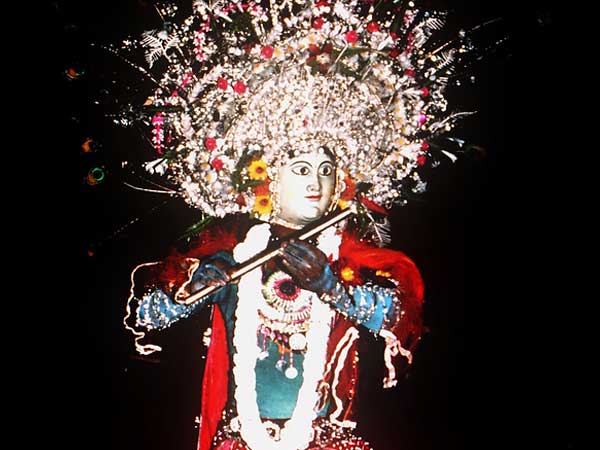 Known as the mecca of rich heritage and culture, India is one of the very few countries in the world that boasts of varied ethnicity and traditions. An instance of this is the folk dances that have survived past many centuries and continue to withstand, despite the lash of modernization. India has been home to thousands of year old tradition of fine arts and classical and folk music and dances. The folk dances of India which is today popular worldwide, reflects the diversity in Indian tradition and culture. Different regions of India boast of their own folk dance form that has its own significance. Eastern India folk dances are one such form. To know more about the folk dances practiced in Eastern India, browse through the following lines.

Chhau (Bihar)
Chhau is the folk dance of Bihar depicting enormous vitality and virility. The word 'Chhau' comes from the Sanskrit root 'Chhaya' meaning shade. Since masks forms an important feature of this dance, it is thence called 'Chhau', which means mask. The dance form includes certain steps from 'Pharikhanda' which is a system of exercise. This system of exercise has been an important part of training of Sipahis. All the performers hold swords and shields, while performing this exercise.

The three main elements of classical dance, namely Raga (melody), Bhava (mood) and Tala (rhythmic timing) forms an important aspect of Chhau dance as well. An expression of a mood, state or condition, this folk dance depicts nature and the animal world, which can be confirmed with the various forms such as Sagara Nritya (ocean dance), Sarpa Nritya (serpent dance) and Mayura Nritya. Themes taken from mythology and everyday life also form an important aspect of Chhau dance.

Chhau dance is a dance full of vitality and robustness, unlike any of the Indian dances. During the performance, the entire body and being of the dancer is employed as a single unit i.e. as his language. This body language is extremely poetic and powerful. The legs even form an effective means of communicating the expression. Although the face is covered by the mask, it mysteriously expresses the feelings to be communicated.

In Mayurbhanj, Chhau is performed mainly in Saraikella. On the 25th day of the Chaitra month, it is believed that Lord Shiva invocated and the dances hence begin. Mainly a male dominated art, Chhau has, however, in recent years, been performed by women. The leading exponents of the Chhau in Saraikella have been the royal princes in Mayurbhanj, the lower classes, the rabble and Purulia farmers, tillers and the like.

Coming to the other aspects of dance, the stage is admirably decorated and brilliantly lit by a large number of torches, lanterns and flickering oil lamps. Ragas of Hindustani music forms the main base of Chhau tunes. The musical instruments used are the Dhol (a cylindrical drum), Nagara (a huge drum) and Sehnais (reed pipes). The dance is performed by men and boys. As it is difficult to dance for very long with a mask, the dance does not last more than 7-10 minutes.

Brita Dance (West Bengal)
A state accredited as being the abode of many renowned poets, thinkers and artists, West Bengal has a rich tradition of folk art as well. Brita or Vrita dance is one of the most important traditional folk dances of Bengal. Mainly performed in the rural areas by the women folk, the dance is held in the premise of a temple to appease the deity and invoke the lord’s blessing.

According to the popular belief, the dance is performed in gratitude after a wish has been fulfilled. Brita or Vrita dance is also performed after a recovery from a contagious disease such as small pox, and so on. Kali Nach is another dance form that is performed during Gajan, in honour of the Goddess Kali. Herein, the performer wears a mask, purified by mantras and dances with a sword, and when worked up can make prophetic answers.

Dalkhai (Orissa)
The 'Dalkhai' is a dance performed by women of the tribes, from the Sambalpur district of Orissa. Quite a virile dance rendered during the time of festivals, the men generally play the musical instruments and the drummers often join the dance. A dummy horse version is the Chaiti Ghorha, danced by a community of fisher folk. In this art, the performers are essentially men. Apart from dancing, the performers sing, deliver homilies of sorts and offer brief dramatic enactments, peppered with wit and humor.

Dancing on stilts is fairly common among the Gond children of Madhya Pradesh. The dance is popular in the Vindhyas and the Satpura ranges. Mainly staged in the rainy season, the dancer, who has his balance on the stilts or gendi, performs even in watery or marshy surface. The dance is brisk and ends in pyramid formation. Mostly confined to children, the main attraction of the dance lies in balancing and clever footwork of the performer.

In villages, where the wheat seedlings festival - Bhujalia is celebrated, children prance on their gendis and collect near the village pond or the river, in which the bhujalias are to be immersed. Other children, dancing to the accompaniment of musical instruments join the group and they dance together. Sometimes womenfolk also join them, but they do not use stilts. The Gendi season begins on the day of Bak Bandhi festival in the month of June and concludes after the Pola dance celebrations in the month of August.

Goti Puas (Orissa)
Thanks to the pioneering efforts of Ramchandradeva that Goti Pua (or boy dancers) came into being, during the latter half the 6th century. The last of the great dynasties of Orissa had collapsed and the Mughals and Afghans were in the midst of a tug-of-war. Ramachandradeva, the Raja of Khurda (a principality in Orissa) had provided refuge to Mughal soldiers, who had been defeated by the Afghan troops and was consequently in the good books of Emperor Akbar.

Pleased with Ramachandradeva's work, Akbar designated him to be Gajapati or King of Orissa, with allegiance to the Mughal Viceroy. He was also appointed Superintendent of the Jagannath temple in Puri. Ramchandradeva was not only an able ruler but also a sensitive and enlightened man. During his reign, maharis or devadasis attached initially only to temples, came to be patronized by the courts. It was on his initiative that led to the tradition of goti puas or the boy dancers.

An additional reason that traces the emergence of goti puas is that the women dancing on the pretext of worship was greatly disapproved by Vaishnavas. So, to eliminate the problem, the custom of dancing by boys dressed as girls was introduced. The boys performing were students of akhadas or gymnasiums, established by Ramachandradeva in Puri, at the boundaries of the temple. Hence, they were also known as Akhada Pilas -boys attached to akhadas.

The mahari and goti pua dance styles co-existed, each independently, but with common roots. The Odissi dance, as we know it today, has evolved from a curious amalgamation of both these dance traditions. The word goti means 'one', 'single' and Pua, 'boy', but the goti puas always is performed in pairs. Boys are recruited at about the age of six and continue to perform till they are 14, then become teachers of the dance or join drama troupes.

Today, goti puas is a part of professional teams known as dals, each headed by a guru. In the dance form, the boys are trained for about two years. After having imbibed the basic technique, they learn items of dance, ornamental and expressional. Since performed by youngsters, the adolescents can adapt their bodies to the dance in a far more flexible manner as opposed to the maharis.

Needless to say, one of the most demanding aspects of the dance tradition in Orissa - the bandha, which involves intricate contortions and positions of the body - is the domain of the sprightly goti puas. A goti pua performance usually commences with Bhumi Pranam (salutation to Mother Earth), and wraps up with Bidahi Sangeet, a farewell song and dance item. The whole performance lasts around three hours.

A goti pua presentation is ably supported by a set of three musicians, who play the pakhawaj, the gini or cymbals and the harmonium. The boys do the singing themselves, though at times the group has an additional singer. The goti pua performance is far more organised than that of the maharis, and includes items such as Panchadevta Puja, Bhumi Pranam and Battu. During the Chandan Jatra festival, along with the maharis, goti puas are ferried in boats down the Narendra Sarovar, a holy tank in Puri, to perform before the deities.

The Jhoolan Jatra, celebrated every August, is the ocassion when the goti puas completely overshadow the maharis. Today, the surviving goti pua dals belong to villages and some prominent groups are from Dimirisena and Raghurajapur near Puri, and Darara, near Bhubaneswar. In the past goti pua artistes were patronised by Zamindars and were much in demand during festivals like Dol Purnima, or Holi and Dussehra. However, like the maharis their existence too is gradually fading into oblivion.