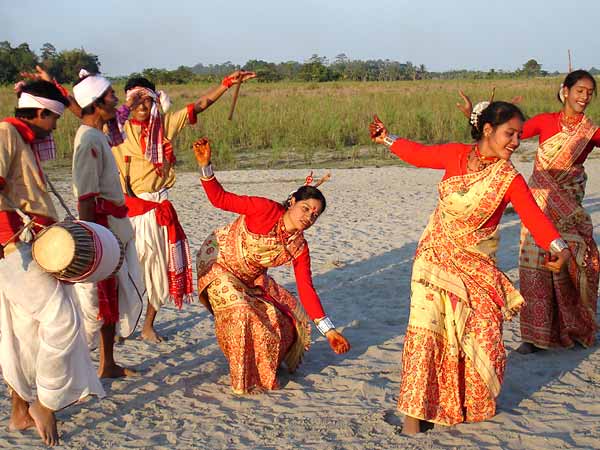 India has a rich and varied collection of folk dances. In fact, these dances form a very important part of the life of most Indians, in terms of entertainment and celebration, particularly those living in the rural areas. India folk dances are originated from the ordinary people of a society or region and today, serve to reflect the diversity in the country's tradition and culture. There are so many folk dances found in different states of India that trying count their number seems to be a Herculean task. We have, therefore, broadly divided them into different regions. In this article, we will provide you with information on the popular folk dances of North East India.

Naga Dances
The dances of the Nagas portray a sense of fun and zest in their life. Harvesting season is main celebration time for all the Naga tribes, which they rejoice through the performance of various dances. Then, there are other occasions on which the dances are performed. The characteristic feature of all Naga dancing is the use of an erect posture, with many movements of the legs and comparatively little use of the torso and shoulders.

Bihu (Assam)
The folk dance of Assam is called 'Bihu'. Every Assamese, young or old, rich or poor, takes delight in the dance, which forms a part of the Bihu festival. The festival comes in mid-April, during the harvesting time (which lasts for a month). During the day, all young men and young girls gather and dance together (though they do not mix-up much), to the tunes of drums and pipes, along with love songs. The dances are performed either in circles or parallel rows.

Hajgiri (Tripura)
Hajgiri is the folk dance of Tripura, the land of a large tribal population. The dance is performed by young girls, who demonstrate a series of balancing skills, and uses instruments of its kind. The dances are a part of the ceremony to appease the goddess Lakshmi, to ensure a happy harvest, as cultivation forms a main source of the tribe's livelihood. Men and women use the compound of their own houses as dancing grounds for the same.

Thang-ta & Dhol-Cholom (Manipur)
The Thang-ta dance of Manipur was an evolution from the martial arts exercises encouraged by the kings of Manipur. The dance is exciting in nature and is performed by young men holding swords and shields. One of the instruments that dominate Manipuri dances is the drum. Dhol Cholom, a drum dance, is one of the dances performed during Holi.

Nongkrem (Meghalaya)
To celebrate the remembrance of the evolution of Khasis and their indigenous democratic state called Hima, 'Nongkrem' dance is performed in Meghalaya, during autumn. The Khasis are a tribe of Meghalaya, who also celebrate the ripening of paddy for threshing, by dances and songs. The folk dances capture the movements of everyday life as well as animals and birds.

Folk Dance of Arunachal Pradesh
In Arunachal Pradesh, an organized group of tribal performers perform dances, plays, musical scripts and dance dramas, based on stories of Lord Buddha. The dancers wear masks of demons or animals, as described in the tales of Buddha, along with splendid costumes. These dances are mostly performed in monasteries, during festivals.

Folk Dances of Sikkim
In Sikkim, the men are attracted more towards the monastic style of dancing, while the women have their own folk dance style. The dances of Sikkim are different than those of Indian traditions. Masks used in dances are something close to Indian cultural dances.