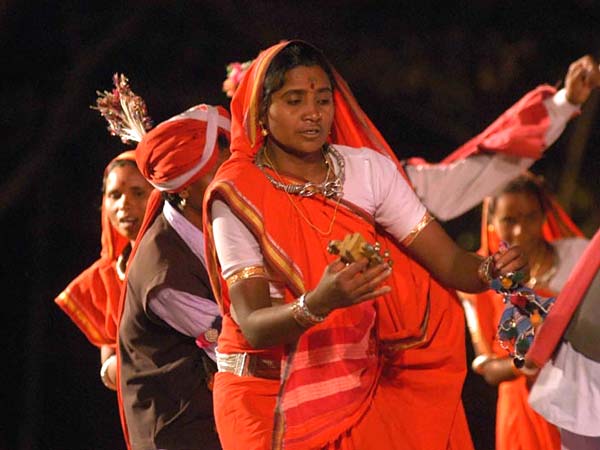 Folk dance can be defined in the simplest words as a form of dance, developed by a group of people, which reflects the traditional life of the people of a certain country or region. This form of dancing involves a group of happy people, following dance instructions given by an experienced caller. The steps are performed in certain formations, such as a circle or a straight line, by the dancers. The term folk dance is reserved and is mainly kept for dances which are, to a major degree bound, by tradition. However, with time, these dances have laid down the foundation for a number of modern dances. The multi-cultural country of India has also seen the development as well as growth of folk dances till date. In the following lines, we have provided information on the popular folk dances of central India.

Gaur Dance
Gaur dance is a popular folk dance of Madhya Pradesh and is popular in the Sing Marias or Tallaguda Marias of South Bastar. It involves men wearing head-dresses, with stringed 'cowries' and plumes of peacock feathers, making their way to the dancing ground. They beat the drums, tossing the horns and feathers of their head-gears to the rising tempo, which gives a wilder touch to the dance. Women, ornamented with brass fillets and bead necklaces around their tattooed bodies, also join the gathering.

Muria Dances
The Muria tribals of North Bastar area are known for performing the fold dances of Muria. These dances start with an invocation or prayer to the phallic deity of their tribe and the founder of the Ghotul institution. One of the popular Muria dances comprises of Har Endanna dance, performed by boys and girls during marriages. Then, there is the Karsana dance, performed for fun and enjoyment. As for the Hulki dance, it is the most beautiful of all Muria dances and has boys moving in a circular fashion, while the girls make their way through them.

Saila Dance
Saila dance is the dance form of Chattisgarh and is performed by young boys in the post harvest time. It is basically a stick-dance, in which dancers (each standing on one leg and supporting himself by holding on to the man in front, form a circle. Then, all of them jump together, going round and round. Saila dance is popular among the people of Sarguja, Chhindwara and Betul districts. It is also known as Danda Nach or Dandar Pate in this region.

Karma Dance
Popular among the Gonds and Baigas of Chhattisgarh and the Oraons of Madhya Pradesh, Karma dance is associated with the fertility cult. This dance forms represents the coming of green branches on trees, during the spring season. It is related to the Karma festival, which falls in the month of August.

Kaksar Dance
Kaksar dance is performed by people in hope of reaping a rich harvest and is popular among the Abhujmarias of Bastar. It is mainly undertaken by young boys and girls, in order to invoke the blessings of the deity. Kaksar dance also presents a unique opportunity to boys and girls to choose their life partners.