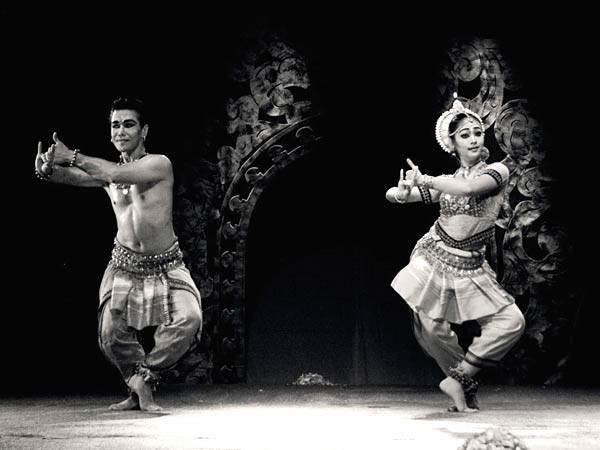 Based on Natya Shastra, Odissi is regarded as one of the oldest surviving dance forms of India, with well preserved archaeological evidence. It has originated from Orissa and its history can be traced back to the 2nd century BC. The dance form has been extensively depicted in the sculptures of Brahmeswara temple and Sun Temple at Konark. Kelucharan Mohapatra, an erstwhile Goti Pua, is the greatest exponent and guru of Odissi. Some of the other exponents of this dance form are Indrani Rehman, Sonal Mansingh, Sanjukta Panigrahi, Protima Gauri Bedi, Madhavi Mudgal, Guru Mayadhar Raut, Guru Deva Prasad Das and Guru Durga Charan Das.

History
The form of Odissi that exists today is the result of a long process of renovation from various dance traditions of Orissa, which includes the Maharis, the Goti puas and the Bhandanritya traditions. Maharis were the counterparts of the Devadasis of the South, who danced in temples. Goti puas were men, who dressed as female dancers and danced like the Maharis. These artistes were not allowed to dance in temples after reaching adulthood. After 17th century, the popularity of Odissi declined largely, because dancers came to be considered as shameless creatures. Thus, there was no one ready to learn the dance form.

With the passing time and the modernization of the thinking of the Indian society, Odissi was brought back to the attention of the public and started gaining back the lost popularity. Kalicharan Pattanayaka is accredited with the revival of Odissi. He presented the Odissi artists to perform on stage and motivated others to follow the suit. In the 1950s, the entire dance form was revitalized by Abhinaya Chandrika, by taking assistance from the sculpted dance poses that already existed in temples.

Theme & Performance
Odissi is similar to Bharatnatyam in terms of the mudras and expressions used in the performance. The 'Tribhang' or the division of the body into three parts, including head, bust and torso, is one of the highlighting features of Odissi. The performances are replete with lores of the eighth incarnation of Vishnu and his avatar of Lord Krishna. It is a soft dance backed by soothing lyrics. Through the performance, the Odissi artist personifies the ambience of Orissa and the philosophy of its most popular deity - Lord Jagannath.

Apart from the depiction of Lord Jagannath, the artist also narrates the stories of Lord Krishna, through his/her performance that includes mudras and rasas. The verses of the Sanskrit play Geet Govinda are also incorporated into the performance, in order to depict the love and devotion to God. Dashavataar, the depiction of the ten incarnations of Lord Vishnu, is a popular performance of Odissi. The Odissi dancers use their head, bust and torso in soft flowing movements to express specific moods and emotions.