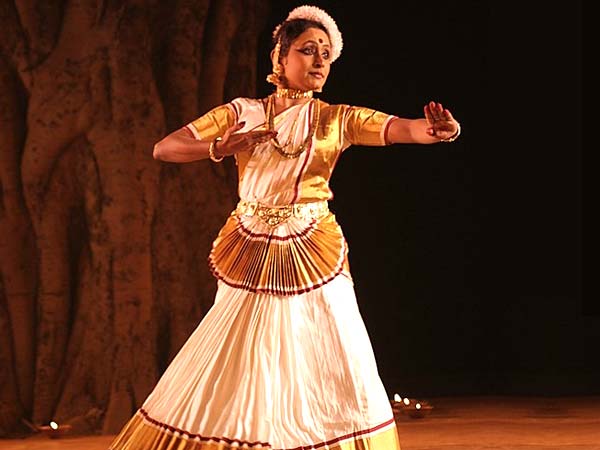 Mohiniattam, in literal terms, means Mohini's dance. Mohini, according to Indian mythology, is a very beautiful woman, who attracts people instantly. She is regarded as an enchantress and thus, Mohiniattam is the dance of the enchantress. It is believed to have been named after Lord Vishnu, who had disguised himself as 'Mohini', with an intention to slay Bhasmasura and during the churning of nectar from the ocean as well. However, the basis of this dance is not seduction alone. It also signifies transformation of Lord Vishnu into a female form and also the concept of 'Ardhnareeshwara' i.e. male and female as one. Like many other dance forms, it is essentially dedicated to the love and devotion towards God and was restricted to the Devadasis.

History
The first reference to Mohiniattam has been found in 'Vyavaharamala', composed by Mazhamangalam Naryanam Namboodiri, assigned to the 16th century A.D. In 19th century, Swati Thirunal, the king of erstwhile Travancore, tried to encourage the development of this dance style. After him, Mohiniattam suffered heavily, owing to the exploitation by the Satraps and the Landlords. Poet Vallathol revived it once again and gave it a prominent status throughout Kerala, through Kalamandalam, which he founded in 1930. Kalamandalam Kalyaniamma and Chinnammu Amma are the last links of a disappearing tradition that nurtured aspirants in the discipline at Kalamandalm.

Theme & Format
The theme of Mohiniattam is love and devotion to god. Lord Vishnu or Krishna is the hero in most of the recitals. The spectators feel His invisible presence when the heroine or her maid details dreams and ambitions, through the circular movements, delicate footsteps and subtle expression. The dancer, with the slow and medium tempos, is able to find adequate space for improvisations and suggestive bhavas. In format, this dance is similar to Bharatanatyam. The movements are as graceful as Odissi. Mohiniattam, like many other dance forms, follows the Hastha Lakshandeepika, as a text book for Mudras, or hand gestures.

Repertoire & Steps
Mohiniattam, essentially a solo dance, is nowadays being performed in groups as well. The repertoire of Mohiniattam closely follows that of Bharatanatyam. Beginning with Cholkettu, the dancer performs Jathiswaram, Varnam, Padam and Thillana in a concert. Varnam combines purity and expression in dance, while Padam tests the histrionic talent of a dancer and Thillana exposes her technical artistry. The basic dance steps are the Adavus which are of four kinds: Taganam, Jaganam, Dhaganam and Sammisram. These names are derived from the nomenclature called Vaittari.

Make-up, Costume & Music
Mohiniattam maintains realistic make-up and simple dressing. The costumes used in dance are sober and attractive. The dancer is attired in a beautiful white and gold-bordered Kasavu saree of Kerala. The style of vocal music for Mohiniattam has generally been seen as classical Carnatic. The lyrics are in Manipravala (a mixture of Sanskrit and Malayalam). Earlier, Thoppi Maddalam and Veena provided the background music of Mohiniattam. These have been replaced, in recent years, by the Mridangam and Violin.