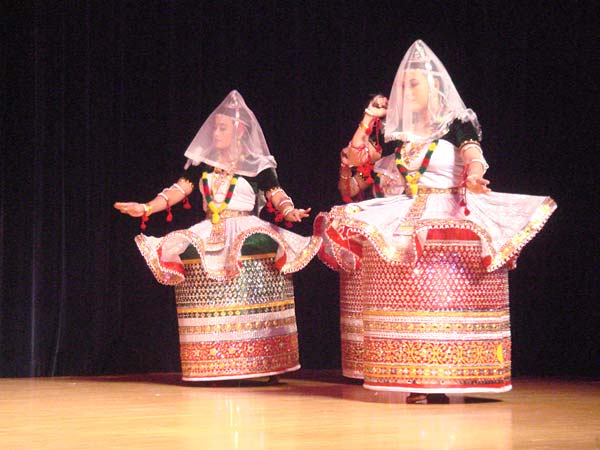 Manipuri is the classical dance from the Manipur region in the North East. Very much religious and associated to Vaishnav cult of Hinduism, the art form primarily depicts episodes from the life of Lord Vishnu. Manipuri dance style is multifaceted and ranges from the softest feminine to the vigorous masculine. Dignified grace is found in every aspect and the range it offers in technique, rhythmic and tempo, which makes a Manipuri recital an absorbing and exhilarating experience. Originating from a north-eastern state of India, Manipur, the movements of the body, feet and facial expressions in the dance are delicate and aspire to exhibit complete devotion and gracefulness.

History
The past and origin of Manipuri dance is not clear, as there are many myths and legends that have been associated with it. The Manipuris consider themselves the descendants of the Gandharvas, who were the legendary musicians, and dancers in the celestial courts of Indira. The earliest records of this dance form date back to about 100 AD. It was King Bhagyachandra of 17th century, who established Manipuri dance on a systematic basis. He gave the Rasleelas (dance dramas) and Sankirtan (form of invocation) a new outlook and composed three of the five types of Ras Lilas - the Maha Ras, the Basanta Ras and the Kunja Ras.

Apart from codifying the style of Ras Leela, King Bhagyachandra also designed the beautiful Manipuri dance costume. In the 19th century, Maharaja Gambhir Singh composed the two parengs of the tandava type - the Goshtha Bhangi Pareng and the Goshtha Vrindaban Pareng. During this time, Maharaja Chandra Kirti Singh shaped the 64 Pung choloms or drum dances and two parengs of the Lasya type - the Vrindaban Bhangi Pareng and Khrumba Bhangi Pareng. Nitya Ras have also been accredited to him. However, it was the continuous efforts of Rabindranath Tagore and other Gurus that the dance became popular even outside the region.

The dance form took a step ahead in 1954 when the Manipur Dance College of Imphal was formed. Today named as, Jawaharlal Nehru Manipur Dance Academy, the institution had started with three great exponents of the genre as its faculty member - Guru Amubi Singh, Guru Amudon Sharma and Guru Atomba Singh. With time, Manipuri dance gained much appreciation and admiration. Later in 1972, Manipuri Nartanalaya was founded in Mumbai, Kolkata and Imphal, while in New Delhi, Manipuri Nrityashram was established

Dance Form
The Vaishnava faith brought along with it the origin of the Manipuri dance. The repertoire is dominated by the themes from the Vishnu Puranas, Bhagvata Puranas, and Geeta Govinda. Slow and gracious movements differentiate Manipuri from other dance styles. The delicate arm movements and gentle foot work characterizes this dance form. Any form of jerks, sharp edges or straight lines in the dance is not seen, which is the only reason as to why Manipuri dance is known for its undulating and soft appearance. While the female 'Rasa' dances is based on the Radha-Krishna theme feature group ballets and solos, the male 'Sankirtana' dances are performed to the pulsating rhythm of the Manipuri Dholak and are full of vitality and energy.