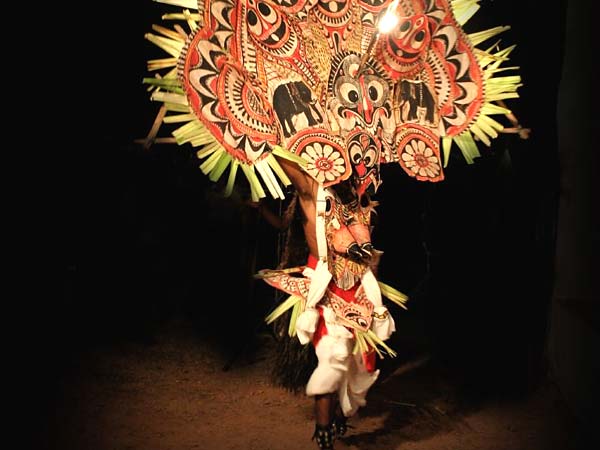 India has a rich and varied collection of folk dances. These dances have made great contribution in the development of the classical dance forms of the country. They are less complex in technique, than their classical counterparts, but do follow a broad set of rules, which vary from one dance to another. Folk dances serve as an important part of the life of many Indians, as entertainment options, particularly those who live in the rural areas. There are so many folk dances and their variations that can be found in India that trying to count their number is almost impossible. However, we can broadly divide them into seven regions, namely Central India, Eastern India, North East India, Northern India, North West India, South India and South West India. In this section, we would acquaint you with the popular folk dances of South India.

Padayani or Paddeni (Kerala)
One of the most colorful and enchanting dances of Kerala, Padayani or Paddeni is associated with the festivals of certain temples. These temples are found in the districts of Alleppey, Quilon, Pathanamthitta and Kottayam districts. The literal meaning of Padayani, in folk art, is military formations or rows of army. It involves a series of divine and semi divine impersonations The performers in Paddeni consist of dancers or actors, singers (who recite different poems for different Kolams) and instrumentalists (who play wild and loud rhythms on their drums called thappu and cymbals).

Padayani dancers wear Kolams of different shapes, colors and designs, painted on the stalks of areca nut fronds. Kolams are basically huge headgears, with many projections and devices, having a mask for the face and a piece to cover the chest and abdomen of the performer. The main kolams (huge masks) used in Padayani are those of Bhairavi (Kali), Kalan (god of death), Yakshi (fairy) and Pakshi (bird). One of the popular Paddeni dances involve the dancers, singers and instrumentalists forming a procession of Kali and her spirits, returning after the killing of the 'Asura' chief Darika.

Kummi and Kolattam (Tamil Nadu)
Kummi and Kolattam are the dances performed by the tribal women of Tamil Nadu, during certain festivals. Kummi is a very simple form of dance, where dancers form circles and clap as they dance. Kolattam is also quite similar, the only difference being the use of small wooden rods by the dancers. The dancers strike the rods in rhythm by, instead of clapping, and provide the main tempo of the dance. The name Kolattam has been derived from Kol (a small stick) and Attam (play), describing its very nature. Kolattam is known by different names in different states of India, such as stick dance, Kolannalu or Kolkolannalu. On an average, a Kolattam dance group consists of 8 to 40 dancers.

Kargam and Puli Vesham (Tamil Nadu)
One of the most essential parts of a ritual dedicated to Mariamma, the Goddess of Health and Rain, in the state of Tamil Nadu is the Kargam dance. It is performed by men, wherein they balance pots, filled with uncooked rice and surrounded by a tall conical bamboo frame covered with flowers, on their head. Drums and long pipes form the musical instruments that accompany the dance. Puli Vesham is another very interesting dance of Tamil Nadu, which is performed by men during a specific festival. In this dance form, the men disguise themselves in tiger costumes and move around the streets.