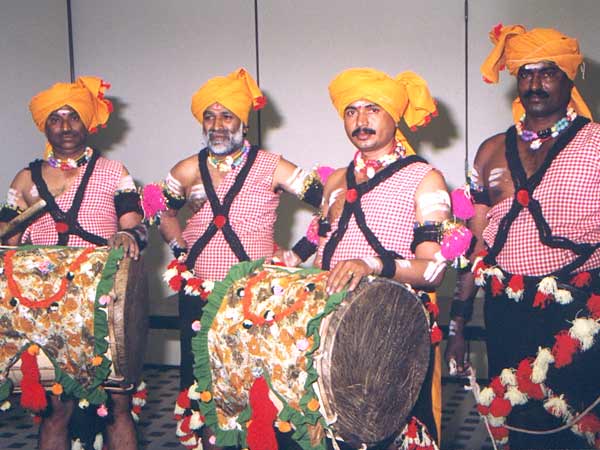 Almost every festival of India is celebrated with a folk dance, making the dance from an integral part of the country's culture. The diversity in culture and tradition of India is reflected in the folk dances of different states as well. While almost all of them are performed by the rural people, to express their joy on almost every occasion and festival, the elements differ from one region to another. Every folk dance has its own specific rhythm, costume and jewelry, which differ from place to another. Below, we are giving information regarding some of the famous folk dances of south west India.

Dollu Kunitha (Karnataka)
It is a popular drum dance of Karnataka, in which large drums are decorated with colored cloth and slung around the necks of men. The dances are, at times, accompanied with songs related to religious praise or wars. They are performed with quick and light movement of the feet and legs. The tribes of Karnataka, basically comprising of hunters and food gatherers, stocked with a regular précis of songs and dances related to hunting, food gathering and burial funeral rites.

Ritual Dances (Karnataka)
Amongst the ritual dances of Karnataka is Kavadis performed for the worship of Lord Subramanya. Then, at harvest time, the Dodavas of Karnataka perform the Balakat dance. Dollu Kunitha also forms a part of the ritualistic dances of Karnataka, which come under 'Kumitha'. Apart from that, we have Devare Thatte Kunitha, Yell-ammana Kunitha and Suggikunitha, which are dances related to the name of a deity or instrument balanced on the head or held in the hand.

Ghode Modni (Goa)
Goa was ruled by the Portuguese for many years. Hence, the European influence is quite evident in the annual Carnival and the folk dance performed therein, known as Ghode Modni (dummy horse presentation). The dance brings forth the brave deeds of the Goan warriors, where the attractively dressed dancers perform armed with swords.

Tarangmel (Goa)
While performing Tarangmel, the energetic young girls and boys crowd the streets in colorful group, with flags and streamers (or tarang) in their hands. This group of young dancers invites everyone to join the festive spirit. Romut, dhol and tasha are the main musical instruments used during the performance of Tarangmel.

Lava Dance of Minicoy (Lakshadweep)
Minicoy is renowned for its tradition of the lava dance, performed during the festive occasions on the island. Lava dance is a very colorful and energetic dance of Lakshadweep, in which the dancers are dressed in multi-hued costumes and headgears. They also carry a drum while dancing. In this form of dance, the participants perform to the rhythmic beats of drums and songs.