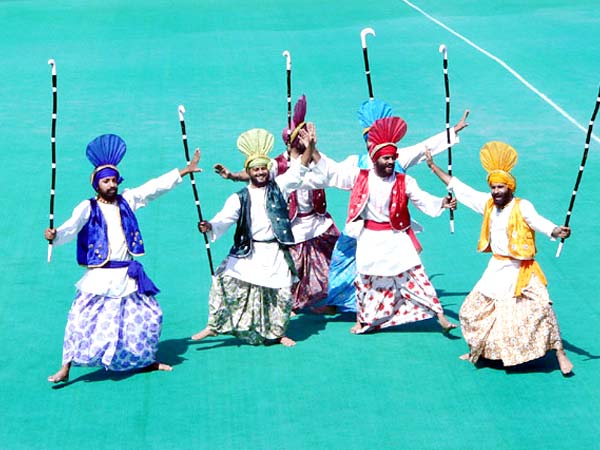 Indian folk dances are creation of different socio-economic set up and traditions. An integral part of the social environment, they are performed on different occasion, which might be the arrival of a new season, a particular festival, the birth of a child or even a wedding. Indian folk dances are full of energy and vitality and are performed to express joy. Each form of these dances has a specific costume, rhythm and movements attached to it. The costumes are mostly colorful in nature, with extensive jewels and designs. Some of the folk dances in India are performed separately by men and women, while others have men and women dancing together. Mostly, the dancers sing themselves and are accompanied by artists with instruments. One important part of Indian folk dances includes those of north India. Given below are the folk dances of the main northern regions of India.

Jammu & Kashmir
Dumhal: The dance of the Kashmiris is called as 'Dumhal'. It is performed by dancers wearing long colorful robes and tall conical caps, studded with beads and shells. It is mainly the men folk of Wattal who perform this dance, that too on specific occasions. While dancing, the performers sing too, with drums to assist their lyrics. The party of performers moves in a ritual manner and digs a banner into the ground, at a set location. The dance begins with the men dancing around this banner.

Himachal Pradesh
Hikat: Hikat is performed by women and comes across as a modification of a game played by children. Forming pairs, the participants extend their arms to the front, gripping each other's wrists. With their body inclined back, they go round and round at the same spot. Namagen: Namagen is another folk dance that is specific to the state of Himachal Pradesh. It mainly celebrates the autumnal hue, in the month of September.

Uttar Pradesh
Hurka Baul: Hurka Baul is performed during paddy and maize cultivation, in different fields, by turns. Its name has been derived from the terms 'hurka', the drum which constitutes the only musical accompaniment to the dance, and 'baul', the song. The singer narrates the story of battles and heroic deeds, while the dancers enter from two opposite sides and enact the stories, in a series of crisp movements. The farmers form two rows and move backwards, in unison, while responding to the tunes of the song and the rhythm of the dancers.

Chholiya: A famous dance of Kumaon region, Chholiya is mainly performed during marriages. As the groom's procession proceeds to the bride's house, male dancers, armed with swords and shields, dance spiritedly.

Punjab
Bhangra: One of the most popular dances of North India, performed during the festival of Baisakhi, is the Bhangra. Among the most virile and captivating dances of India, it is undertaken by men and includes tricks and acrobatic feats. The drummer, usually in the centre of the circle, is surrounded by men dressed in lungis and turbans.

Gidha: The dance performed by the women folk of Punjab is called the Gidha. In this dance form, a woman or a pair of women dances at a time, while the others surround them and clap in rhythm. The dance is mainly performed during the festival of Teeyan, to welcome the rains.

Haryana
Dhamyal: The folk dance of Haryana is known as the 'Dhamyal' or the 'Duph'. The dance can be performed by men alone as well as with women. The Duph, after which the dance form is anmed, is a circular drum, played nimbly by the male dancers, as they dance.